*By donating, you warrant this contribution is made by an individual and in compliance with FEC regulations.

Here are two examples of Greens speaking (or writing) to people and to power.  The first is an excerpt from the guest column by B. Burris written late last year for the Albuquerque Journal.

Neoconservatives and the military-industrial complex are eagerly supporting Clinton over Trump in anticipation of a return to the more aggressive foreign policy orientation of George W. Bush.

Some say, “Well, we have to vote for the lesser of the two evils.” I myself have voted in this way much of my life. However, although lesser-evil voting seems to make sense in the short run, when one looks at the effect over time, its problems become clear.

Repeatedly voting for the perceived lesser evil lowers standards and creates a “race to the bottom.” By voting for candidates who do not share our values just because they seem better than the opposing candidate, we have given carte blanche to party elites to choose the nominee. As a result, both parties have moved to the right in recent decades: the Republicans to the far right and the Democrats to the center right. Both parties are increasingly influenced by corporate donors and the military-industrial complex.

I have decided to say “enough is enough” and reject both of the corrupt and undemocratic political parties.

I am working with others to build a progressive alternative by supporting the Green Party and their presidential ticket of Jill Stein and Ajamu Baraka. The Green Party is an international party with parties in almost 90 countries.

Green parties have been particularly influential in Western Europe and Scandinavia, where they work for environmental and social democratic policies. The German Green Party, founded in 1980, has participated in coalition governments for many years.

Green parties have been at the forefront of raising environmental concerns and addressing climate change, but they also prioritize social justice, grass-roots democracy and nonviolence/peace. To learn more about Green party politics, you can find its U.S. platform at gp.org/platform. It is a detailed and excellent platform.

Whomever you vote for on Nov. 8, I would encourage you to vote based on your values rather than your fears. The more that we vote out of fear, the more fearful our world becomes. The more that we disregard our values, the more corrupt and amoral our society becomes. Vote not for the lesser evil but rather for the greater good.

The following image is the recently published letter by P. Rogers taking on the state legislature for failing to curb predatory lenders. 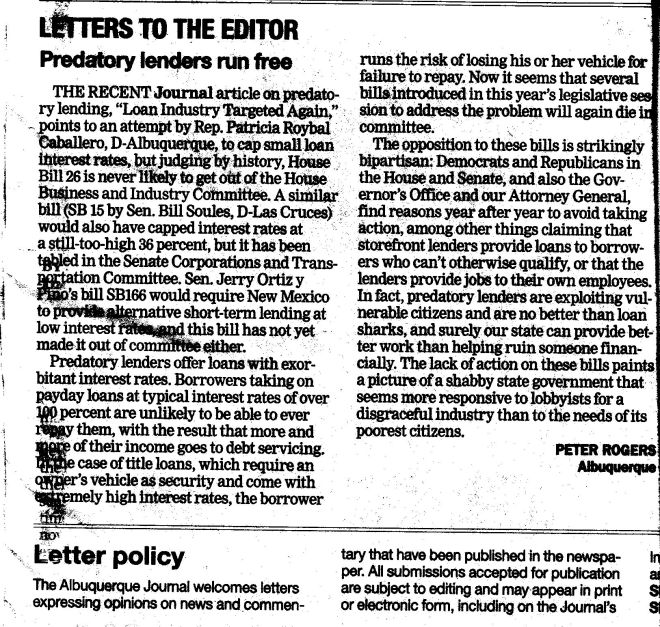